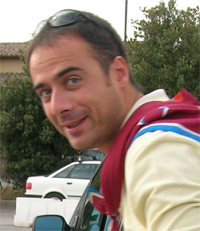 Interested in UFOs since 1990, he was a member of Centro Ufologico Nazionale (CUN) between 1991 and 1996, and has been a member of Centro Italiano Studi Ufologici (CISU) since 1992 (a regional director for Tuscany since 2002 and a national board member for a few months in 2005).

As such he has not only investigated dozens of local sightings, but also built up a provincial file and wrote a book on UFOs Visiting Siena (1996).

Since 1995 he has been coordinating USOCAT, the national catalogue of Italian USO (Unidentified Submerged Objects) reports. A preliminary edition of UsoCat was released in 1996, and a second (enlarged and revised) edition was published in 2003. All USOCAT cases have been translated to English at Carl Feindt’s WaterUFO website.

He also re-investigated a famous CE-III with ground traces and physical effects, which took place in Torrita di Siena, in 1978, and published a full book about it in 2008.

After publishing an history of all known Tuscanian ufologists and UFO groups in 2008, he is now working on the (much wider) regional catalogue of UFO reports over Tuscany.