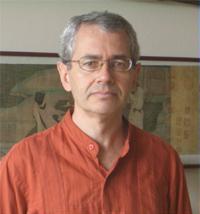 Ignacio Cabria García  was born in Santander in 1955. He graduated in Cultural Anthropolgy at the Barcelona University and got a M.A. in Social Anthropology  and a M.A. in International Cooperation   at the Universidad Complutense  in Madrid. He has worked in Spanish Embassies in Mozambique, Argentine and Philippines, and is presently working with the Agencia Española de Cooperación Internacional in República Dominicana.

Since 1976, he has been investigating UFOs in association with CIOVE and CEI. He has been in the editorial board of UFO journals like Vimana (since 1978) and later Cuadernos de ufologia (since 1987).

He has long been studying UFOs and ufology under the viewpoint of social sciences, and has written two books about that subject: “Entre ufólogos, creyentes y contactados: una historia social de los ovnis en España” (1993) and “Ovnis y ciencias humanas” (2002), a well as several articles (notably in Cuadernos de ufologia). He is also author of papers about history and  anthropology of African countries and Philippines.