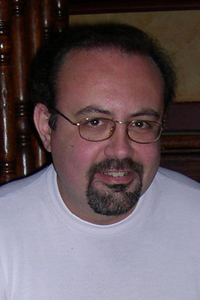 He has been an active investigator since 1988, expecially on local sightings in the Canarias Islands, and has published several articles in Cuadernos de ufologia (but also in the Spanish Air Force magazine Revista de Aeronáutica y Astronáutica), as well as two books: Luces en los cielos (2003), and Los
Ovnis ¡vaya timo! (2006).

He also taught university lessons on UFO and paranormal beliefs from a skeptical point of view since the early 2000’s.