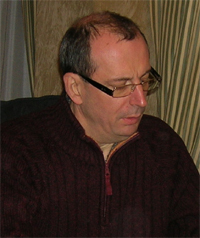 Born in Turin (1957), classical and pedagogical studies, later theology and nursing, is presently working as a human resources manager in a private clinic.

Interested in UFOs since a teenager, he was director of local CUN branch (1975-1978); a founding member of Centro Italiano Studi Ufologici in 1985, he’s been intermittantly serving as a CISU board member.

A most active field investigator since the mid-‘70s, he has investigated hundreds of reports, expecially close encounters and military witnesses. He is also a frequent writer, with dozens of articles published (in Ufologia, Notiziario Ufo, Ufo – Rivista di informazione ufologica, etc.). See Paolo Fiorino’s Bibliography.

Specializing in CE3 (humanoid) reports since 1978, in 1984 he became coordinator of  the archiving and cataloguing “Project Italy 3” on such Italian cases.

In 1997 he began collecting and cataloguing Italian UFO sightings with military witnesses or military implications (OVNI-F.A.) and established a regular contact between CISU and the Ministry of Defence, finally leading to a complete declassification of the UFO files by the Italian Air Force.

He has also long been interested in sociological aspects of the UFO subject, and has built the largest existing Italian collection of UFO-inspired objects (toys, comics, gadgets, furniture, advertising, music and anything else).