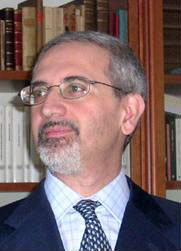 Born in 1965 in Florence, where he had been living until 2002 and followed university courses in political science. After his marriage, he moved to Pinerolo, where he is working for a real estate firm.
A UFO buff since his teen years, he has been a council member of Sezione Ufologica Fiorentina (SUF) since 1986 and an editorial staff member of the monthly Il Giornale dei Misteri between 1987 and 1997. A former member of Centro Ufologico Nazionale (CUN) in 1986-1987, since 1988 he has been an active member of Centro Italiano Studi Ufologici (CISU), as a field investigator and regional coordinator for Tuscany, later as the editor-in-chief of its internal newsletter UFO Forum (2000-2001) and since 2002 he is one of the editors of CISU journal UFO – Rivista di informazione ufologica.
A specialist in UFO storiography, he is the author of about one hundred articles, a few monographs and three books (Scrutate i cieli!, 2000; Ultimatum alla Terra, 2002; L’alba di una nuova era, 2004) about the UFO waves of 1950, 1952 and 1946 in Italy and the rest of the world (his two-volumes study on the 1954 wave is also forthcoming).
He is the coordinator of three research projects:
– Operation Origins: recovery, filing and analysis of everything concerning the early years 1946-1954 in Italy;
– Earth Lights Project: updating a bibliography on ghost lights, St. Elmo’s fire, will-o-the-whisp, etc., also keeping  the database ELIA (Earth Lights International Catalog) on places where localized, recurrent light phenomena are reported;
– CrashCat: a catalogue and archive of Italian reports of unidentified flying objects seen falling from the sky to the ground since 1870.
Address: via Enrico Cravero, 31, I-10064 Pinerolo (TO), Italy
e-mail: giuseppe.stilo@usa.net