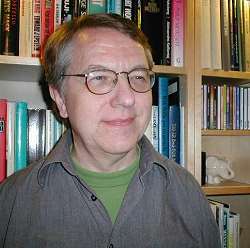 My UFO interest was spurred in the mid-60s when I read the books in Swedish by pioneering ufologist K. Gösta Rehn (UFOs: Here and Now, also published in English), and also the fascinating American contactee literature, translated and published in Swedish by the Parthenon publishing company (both the Rehn and Parthenon archives are now part of AFU). In 1969 I wrote my first articles on UFOs for the school paper and for a local newspaper. In 1970, I was one of the founding members of UFO-Sweden, the national UFO organization. For a couple of years I was an editorial member of their magazine UFO-Information and headed the organization’s report centre for about one year. In 1973, in the company of a few ufological friends, I left UFO-Sweden (at that time a group with an occult-New Age oriented belief system that left us dissatisfied), We founded a group with the acronym AFU; an acronym which in 1980 took the meaning Archives for UFO Research and became a self-owning foundation.

In the 1970s and 1980s I was one of the first persons to go through the formerly secret Swedish archives concerning the ghost flier wave in the 1930’s, and the ghost rockets in 1946. I have also been involved in the study of several Swedish close encounters, particularly the Domsten case (Swedish booklet written with Clas Svahn) and the Mariannelund (Gideon Johansson) humanoid sighting case (Swedish version of this study is available on UFO-Sweden’s web site and has recently been printed in UFO-Sweden’s UFO-Aktuellt magazine).

I am today the principal manager and “chief administrator”, as well as the chairman, of AFU, one of the largest UFO-related archives & libraries in the world with a catalogued books and documents library of more than 8.000 volumes (5.000 different titles), 23.000 catalogued magazine issues, 30-40.000 news clippings (soon 10.000 of them are catalogued), 2.000 audio cassettes (recently catalogued to 50 %), some 600 videos, extensive personal and organizational files from (mainly) Scandinavian ufologists and groups, and a lot of pictures, posters and other paraphernalia.

Besides my UFO interest, and activities with AFU, which takes too much time, I work part-time (75 %) as a database manager with the town’s largest housing company. My daily work involves a lot of SQL coding. I am also aiming to become the company’s historian by caring for the company’s archive and studying the local history of our houses and housing areas at local archives. Since I was 15 I have been a member of Swedish and international societies that study the history of ships and shipping and also of aviation history. There was a time in my youth when I was a ship spotter of sorts in the harbour of my hometown, sea ships – not space ships. Times have changed but I am still interested in marine history, too.

I have contributed to several international compilations of UFO Research: “UFOs 1947-1987 The 40 Year Search for an Explanation” (Fortean Tomes 1987, ed. Evans/Spencer), ”Phenomenon” (Futura 1988, ed. Spencer/Evans) and ”UFOs & Alien Contact” (Prometheus Books 1998, Bartholomew/Howard). In 1997 I wrote the chapter ”General Doolittle and the Ghost Rockets” for the book ”UFO 1947-1997 Fifty Years of Flying Saucers” (John Brown). In the same year I contributed a chapter on Swedish cases from 1947 for Jan Aldrich’s ”Project 1947: A preliminary report on the 1947 UFO sighting wave” (UFO Research Coalition).  In a not too distant future I hope to find the time for more original writing – based on research in the AFU archives – but for the moment this is not possible due to my ‘civilian’ work and the work-load created by the steady flow of incoming collections and materials to AFU.

My future hope is to develop the AFU archives even further. One immediate problem, as I write this in December of 2005, is trying to find (and finance!) a new combined locality – under one roof – for the AFU collections, since the three buildings where the archives are now housed will be undergoing substantial repairs, probably during the years 2006-2008. The collections will have to be moved out, for a while, at three different localities, then moved back again. Since we already have a problem with having three archives at different places along the same street, the best thing for the future would be moving into a completely new, larger facility that can hold everything under one roof. Our dreams in 1973, when we started AFU, have been realized to a degree far above what we could then even fantasize about. Now is the time to envision and create the future for AFU, once again.