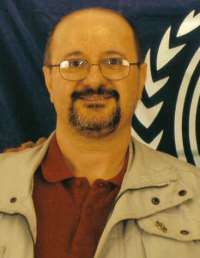 Marco Orlandi was born in Bologna, in 1958. There he also graduated in Law and is working in a scientific research institute as an administrative clerk. He is married and his son Simone has also been an active ufologist.

He has been a member of Centro Italiano Studi Ufologici since its foundation, in 1986.

Since 1994, he has been the coordinator of CISU Project AirCat, meant to collect, file and catalogue all Italian UFO/IFO sightings by pilots and UFO/aircraft interactions. He wrote several articles on this subject (see Marco Orlandi’s bibliography), as well as two editions of the AirCat catalogue itself, published as CISU monographs in 2001 and 2004.

History, Astronautics and Science Fiction are among his other interests.