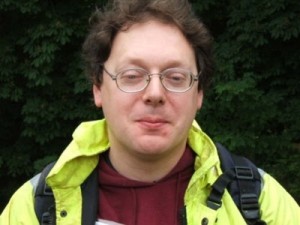 Born in 1965, Robert Moore has been interested in UFOs since childhood. He first became involved in the subject during the 1980’s, and has been intermittently active since that date.
A BUFORA Accredited Investigator of long-standing, he has been editor of some UFO magazines (most significantly BUFORA Bulletin) during the latter part of the 1990’s.
He was also one of the co-authors of UFOs: The Final Answer (Blanford 1993).
Resigning from BUFORA in 1999, Robert then assisted in the attempted re-establishment of UFOIN (UFO Investigators Network) during the early 2000’s.
He later left the subject in 2000 to read archaeology at tertiary college and later University  – returning to Ufology following his graduation from University in 2007. Professionally he has a BA (hons) degree and HNC diploma in archaeology and notable experience in ICT.
His main study areas include the alleged attributes of true UFOs and British “Unknowns”, the British UFO movement 1970-2005, IFOs and perception, earthlight phenomena and the application of I.T. within UFO research (especially in regards to digital archiving and dissemination of research).
He is also author of the Ufology Handbook – a free e-book outlining the UFO phenomena in its totality.
From 1999 up to the present Robert has also been compiling PRIMEBASE – an attempt to list all documented British unknowns; the first draft now being available on the Internet. Robert’s recent projects include the digitalisation of British UFO magazines and books as an intellectual resource for other researchers.