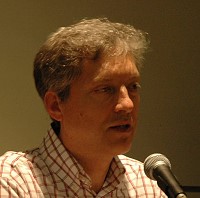 Paolo Toselli was born in 1960, lives in Alessandria and has been employed for twentyfour years by a major national gas distribution company.

An active field investigator, a prolific writer (of articles published in Italian as well as international UFO periodicals, plus some book chapters), a frequent speaker at UFO congresses in Italy and abroad, he has also been very involved in public education, with dozens of interviewes on papers, radio and TV.

Since 1978 he has been concentrating on psychological, perception and sociological issues of the UFO experience, with a specific interest for IFOs. His paper on “The IFO Experience” at the International UPIAR Colloquium on Human Sciences and UFO Phenomena (Salzburg, July 1982) has become a classic in the specialized literature.

A former member and provincial director of CUN (Centro Ufologico Nazionale, 1978-1985), he was a founding member of CISU (Centro Italiano Studi Ufologici) in 1985 and has long been on CISU council (as a President between 1996 and 1998) and in the editorial  team of its journal UFO – Rivista di informazione ufologica.

Besides ufology, since 1990 he has also been active in the “urban legends” collection and study, about which he became a nazional expert, founded the Italian Center for Rumours and Contemporary Legends (CeRaVoLC), published its newsletter TutteStorie and wrote four books.

He is presently coordinator of a few CISU research/catalogue projects:

Within the EuroUfo.net, since 2007 he has been charged to keep the catalogue of European Trans-national flaps of UFO/IFO sightings.

Since the demise of the specialized web catalogue by Jacques Poulet in 2006, Paolo is also keeping and updating the international catalogue of University Theses and Dissertations about UFOs.