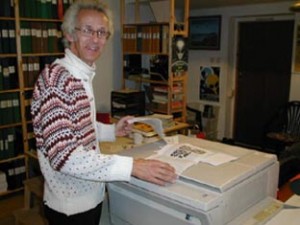 Born 1949 and has lived all his life on the peninsula of Vikbolandet, east of Norrköping, Sweden.

Interested primarily in the contactee aspect of UFOs, has been collecting contactee stories into an international catalogue since 1970, when he first became a member of UFO-Sweden. Nowadays his outlook on the UFO phenomena is very skeptical – yet open.

Since 1980 Sven-Olov works a few hours each day as the archivist and librarian with Archives for UFO Research, keeping order to the collections, sending out newsletters, copies, loans and sold materials to our contacts & customers world-wide.

His other interests include Swedish literature, Swedish folk music and football. He has also assembled a vast collection of materials on unsolved crimes in Sweden, including the murder of Prime Minister Olof Palme in 1986.

Sven-Olov has no Internet connection or email, but can be researched through afu@ufo.se