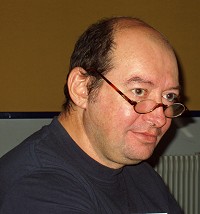 Involved in Paris UFO groups (expecially SPEPSE and GEOS) since his teen years, in the early ’70s, he was in the editorial team of Les extraterrestres magazine.

At first interested in the logics and semantics of ufology (“The Babel’s Law”), he later concentrated on the psychological and sociological issues with an experimental “Project Magonia” (meant to check the “UFO image” diffusion in the public eye) and some analysis about the UFO stereotype dispersion to non-Western people (eg. China and Algeria).

Among the first to raise a critical voice against Monnerie’s neo-skepticism, he nonetheless adopted some of its crucial issues vs. the “true believers”, and thus became one of the coordinators for the Paris university-oriented UFO collective, the organizer of the UFO meeting in Le Bugue (France, 1981) and co-organizer of the First European Congress on anomalous aerial phenomena hosted by SOBEPS in Brussels (Belgium, 1988), which he co-edited both proceedings of.

After an active involvement in studying English “crop circles” first summers (his article about the VECA mission in the UK was published in popular science magazine “Science et vie”), in the last few years his main activity has been focused on the recovery and inventory of old UFO archives, through the SCEAU association.