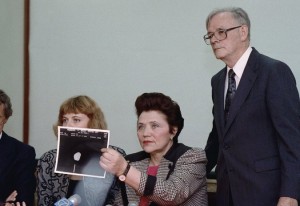 Marina Lavrentyevna Vasylieva decided to become a military pilot at 14 years old, when her family had to flee in front of the Nazi advance. The bureaucratic obstacles, her short stature and age prevented him from entering the academy at that time, but latershe became a legend as an aeronautics officer and test driver, driving experimental aircrafts, beating speed records and even entering the small group of cosmonaut women candidates to go into space.

Interested in UFOs after a personal sighting, she wrote a first book on the subject (“UFO Glasnost”, later translated into German) in 1991, claiming that the USA and USSR governments concealed evidence that UFOs were extraterrestrial crafts. She later wrote other books and participated in conferences and UFO events both in his country and abroad, the most famous of which in San Francisco, in 1991, claiming the space probe Phobos 2 had photographed a mysterious object near the satellite of Mars, before disappearing mysteriously.

Marina had long been married to cosmonaut Pavel Popovich, who had been deputy director of the UFO committee within the Soviet Academy of Sciences since 1984 and later became chairman of the Russian UFO Association SoyuzUfoTsentr.