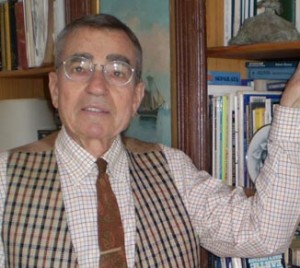 He was born on January 18, 1931 and had been actively interested in the UFO subject since  the second half of the ’50s,  collecting a huge documentation and writing hundreds of articles and papers, most of them unpublished and only circulated by letter.

Since the 1960s, in order to overcome difficulties in duplication, he created an original way of exchanging documents (clippings, letters, reports, comments) by photographic reproductions he sent copy of to a worldwide network of correspondents. He was among the first Spanish collaborators of UFO organizations and magazines such as APRO, NICAP, Flying Saucer Review, Lumiéres dans la nuit.

Son of his time, he was certainly not an exponent of the scientific branch of ufology. By his own admission, he was rather interested in the philosophical aspects of the extraterrestrial contact” concept (which he himself called “transufology”).

Since the ’70s, Darnaude was also an avid collector of all that concerned the “Ummo affair” (the letters a so-called group of extraterrestrials would send to numerous UFO students, especially Spanish ones, describing their world, science and technical know-how), creating a monumental 1,500-page catalog, the UmmoCat.

In the new millennium, he became fond of the Internet he published on his own website a large part of the documentation he had collected on the UFO topic (about 13,000 pages), between 2006 and 2015.