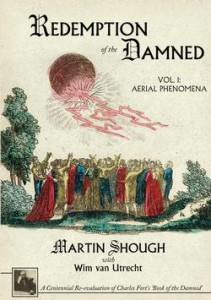 In 1919, exactly 100 years ago, “The Book of the Damned” was published, in which the American writer Charles Fort started a line of studies and publications still alive and vital today.

Strange phenomena, unexplained events, anomalous experiences of all kinds (“damned” because not accepted by science) constituted the raw material for the tens of thousands of notes Fort culled from scientific journals as well as newspapers.

Such matters as ufology, ancient astronauts, cryptozoology have taken on a life of their own, while the broader “fortean phenomena” students continue to gather all kind of unusual and the mysterious news items (ice, frog and fish showers, spontaneous human combustion, out of place artifacts, findings of anachronistic objects…).

Others  have followed in his footsteps, continuing and expanding the collection work, with books, periodicals and associations. In this century anniversary, a new and original work comes out that has required years of study and verification of the sources. British EuroUfo member Martin Shough is the promoter and lead author, while our Belgian fellow Wim van Utrecht joined to lend a hand.

“Redemption of the Damned”  is an accurate “re-evaluation after one hundred years” of the work by Charles Fort, an often quoted, little read, even less understood author. For the first time the eyes and the skills of contemporary researchers have recovered the original sources of all the anomalous observations reported by Fort in the fields of astronomy, meteorology and atmospheric optics, subjecting them to a careful critical examination, correcting mistakes, contextualizing each case, analyzing everything in the light of current knowledge, methods and resources, in an attempt to find rational explanations, something that was possible in a large number of cases (with solutions that can sometimes shock the general public and even surprise specialists), while some well documented events remain unexplained.

The volume has 412 pages in large format (with 250 illustrations), is published in the USA by Anomalist Books with a foreword by Bob Rickard (founder in 1973 and long editor of “Fortean Times”). Needless to say, it cannot be missing from the personal library of every Fortean or student of unusual aerial phenomena.