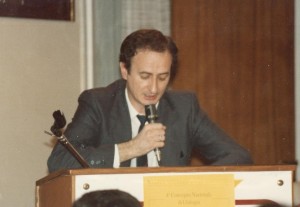 On 20 October 2020 the CISU board of directors appointed Roberto Farabone as honorary president of the Italian Center for UFO Studies.
Born in Bologna in 1944, with a degree in physics, he  moved to Milan, where he spent his entire career as a computer scientist in a multinational company, writing several technical books and manuals.
Interested in UFOs since the mid-1960s, he joined the CUN, then assumed a leading role in the CNIFAA (Independent National Committee for the Study of Anomalous Aerial Phenomena) and in 1976 became editor of UPIAR (UFO Phenomena International Annual Review), the first example of a refereed journal about UFOs.
In 1979 he was among the promoters of a request signed by over 30 scientists and academics, to ask the Italian Ministry of Defense a full  access to UFO data collected by the Italian military. The same year he was appointed coordinator of the scientific committee of Centro Ufologico Nazionale and later served on the editorial board of CUN internal magazine “Quaderni UFO”. 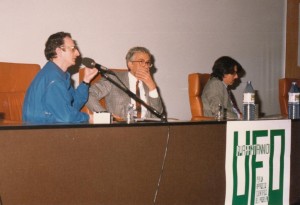 In 1982 he was coordinator of the International Upiar Colloquium on Human Sciences and UFO Phenomena, held in Salzburg, also editing the congress proceedings. When the Cooperative Initiatives and Studies UPIAR was created, he was named board president and later a council member until 2005. A founding member of CISU, he held the position of president from 1988 to 1996.
In his long UFO activity he has carried out investigations, lectured, participated in conferences and written dozens of articles published, among other things, in “Notiziario Ufo”, “Ufologia”; “Ufo Forum”.
After retiring from active ufology, he donated his archives and UFO library to the Italian Center for UFO Studies.
– – –

In the photo below: Farabone with Renzo Cabassi and Alessandro Meluzzi at CISU International Congress (Turin, 20/06/1987)