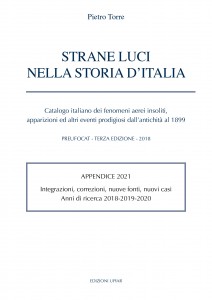 CISU research projects have always been conceived as a continuous work of collection, cataloguing and analysis. Such is PreUfoCat, i.e. the catalog of observations of aerial phenomena over Italy in past centuries) and its editor  Pietro Torre is constantly updating it.

In 2018 the third edition of “Strange Lights in Italian History” was published: a detailed collection of 3400 unusual aerial phenomena from Ancient Rome to 1899: more than 1000 pages with complete descriptions, bibliographic sources and evaluations.

Now he released a 40-pages booklet updating the catalogue with his hew findings in the last three years, adding new case histories and correcting  or integrating some already published. It is available in both digital and paper format, as a to supplement to the latest full edition (also available in both formats on the website www.upiar.com).

Another recent book on the same subject was published by regional writer and historian Eraldo Baldini: “What they were seeing in the sky” [subtitled “Comets,’prodigies’, flying objects in the chronicles and testimonies from Antiquity at the end of the 17th century (with particular regard to the Romagna and Emilian areas”], is a collection of celestial phenomena accompanied by a rich and detailed bibliography (174 pages,“Il Ponte Vecchio” Publishing Company, Cesena).

Very interesting is the author’s approach in the book introduction: “It would perhaps be superficial to always and in any case liquidate the stories of some events such as fantasies, inventions and “editorial” operations: sometimes  reports of events considered as “prodigious” may in fact contain, in addition to inevitable hyperboles, misunderstandings, political and religious purposes and commercial intentions, also elements of “truth” and , albeit flavored by the wonder of pre-scientific thought, they may represent chronicles and testimonies born from something concrete”.
Baldini also underlines how a sort of barrier seems to exist between sometimes hyper-rationalist attitudes and, on the other hand, the more exotic and imaginative interpretations we are unfortunately used to. His conclusion is therefore that “A reasoned and critical mediation has always appeared difficult, even if it is impossible to think that the supporters of the most extreme UFO theories do not have reservations and doubts about the interpretation of many passages of the old texts, and at the same time that the more prepared and “orthodox” historians do not in turn prove, in some cases, doubts, and do not ask themselves questions in front of certain descriptions. (…) It would be in our opinion necessary and constructive re-read today those accounts of ancient “prodigies”, especially the heavenly ones, with a critical but open mind, without having married ideas and matured preconceived closures, with the always precious ability to ask questions”.
Those are highly acceptable considerations, which seem reflected the same assumptions in our own  way of dealing with this topic and in Pietro Torre’s whole work. 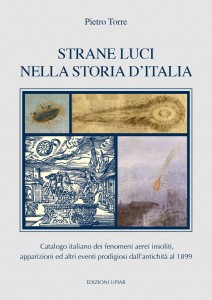 PreUfoCat is the catalog of unusual aerial phenomena over the Italian peninsula all along the centuries before 1900, coordinated by Pietro Torre. Its third edition has just been published by Upiar Publications under the title “Strange Lights in Italian History”. 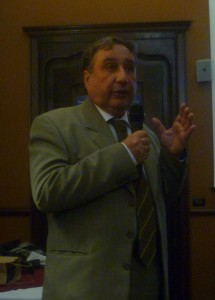 The first edition (November 2011) presented about a thousand case histories in 260 large-format pages. The second edition (exactly three years later) had doubled the total of cases collected and reported in full, with bibliographic sources and illustrations, coming to 684 pages for a  limited edition (for collectors only) on paper, while the catalogue went out in a digital DVD edition (with a 12-page introductory paper booklet).

This third edition, arriving almost four years after the second, has risen to over 3,400 case histories, so that the 1,010 paper pages have been broken into two volumes for the limited edition (once again for collectors only, in full color), paralleling the DVD edition.

Both versions (as well as previous editions) can be purchased as usual from the Upiar Store website. 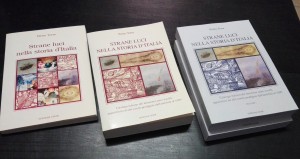 In the central picture: Pietro Torre presenting PreUfoCat first edition at the 26th CISU conference (Turin, 2011)
Below: comparing the three editions of PreUfoCat.