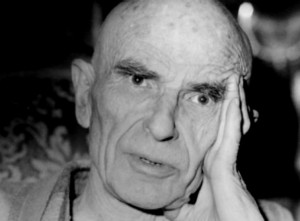 On May 12, 1919, exactly one hundred years ago, Aimé Michel was born in the little village of Saint-Vincent-les-Fort (in the French Alps).

For thirty years he was one of the most influential ufology scholars. A graduate in philosophy, radio and television journalist and scientific popularizer, he was interested in “flying saucers” reports since the early years. In 1954 he published a book (“Lueurs sur les soucoupes volantes”, translated as “The Truth on Flying Saucers” in the USA) which caused a sensation because it was the first in France to cope with that subject in a rational and scientific way, just a few  months before that country was overwhelmed by the great autumn wave of UFO sightings and landings, which he himself had foreseen assuming a two-year cycle. 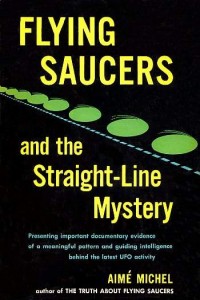 This flood of observations, unprecedented in Europe, built the core of his second book (“Mystérieux Objects Célestes”, 1958;  “Flying Saucers and the Straight Lline Mystery” in the USA) which was based on the discovery that UFO sightings seemed to take place along straight lines (“orthoteny”) changing along the days.

The possibility of applying a mathematical analysis to all the reports (with the consequence of stimulating the creation of the first computerized catalog), the attention centered on the landings and on what weren’t yet called “close encounters”, the formation around him of a large international network of correspondents (the “invisible college”) including scientists, technicians, intellectuals and military personnel privately but actively interested in the subject: all these were the important consequences of that book, which represented if not the birth at least the conception of the “scientific ufology”.

In the following years Michel focused on the implications and contradictions of the extraterrestrial hypothesis, of which he was always a supporter, through conceptual elaborations on the “problem of non-contact “, on the deceptive nature of the phenomenon (making us the equivalent of the mouse in the maze), finally coming to the conclusion of an intrinsic transcendence and unknowability of its causes and therefore to him leaving ufology in 1980. 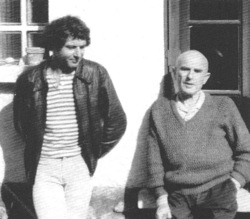 Beside UFOs (an acronym he did not like and which he preferred to replace with the French “MOC”), Michel was interested in and wrote on many other topics, from ethology to mysticism, from psychology to epistemology, and he was a driving force within the “fantastic realism”  around the Planète magazine.

An attempt to collect all his wide bibliography (and in particular his numerous articles) by a small group of enthusiasts is available on a specialized website dedicated to Aimé Michel (to whom the Italian Center for UFO Studies lent a hand by sending copy of its thick file of Michel’s UFO articles).

In the lower photo: Aimé Michel in 1981 with writer and ufologist Bertrand Méheust.