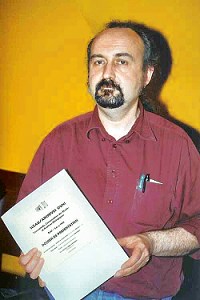 Born in 1955, Gilles Durand is a professional librarian. He contributed to many French UFO groups (GEPA, CEPI, LDLN, AESV, GNEGU). He notably founded in 1981, with Michel Coste, the AIHPI (Association for the Historical Investigation of Unexplained Phenomena) and took part in 1983 in founding CIGU (Committee of the Ile-de-France UFO Groups) and in 1990 in founding SCEAU/Archives OVNI, of which he became general secretary.
He continues to enrich his HISTOCAT catalogue on pre-arnoldian cases and his newspaper clipping collection on UFOs (presently more than 5000 articles).
He is also interested in the crop circle phenomenon (he took part in 1990 and 1991 in VECA – French acronym for Field Trips to English Circles) and is preparing an history of the French UFO groups