2018 is marking the fortieth anniversary of the great wave of UFO sightings over Italy in 1978, the year with the greatest numer of reports and case histories collected throughout the twentieth century.

Twenty years ago, the Italian Center for UFO Studies (Centro Italiano Studi Ufologici, CISU) already devoted its 13th national congress to re-examining that extraordinary year, with analysis and comparison of the international scene.

A few months ago, 40 years after the events, the CISU launched a new “Project ’78” based on the center impressive archives, a project with two different sections, whose first results are coming in these days. 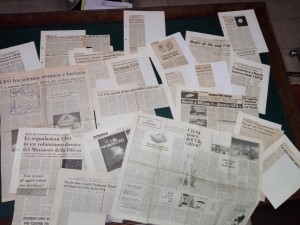 A first part of the project consisted in the digitalization and full indexing of all press sources of that year. The Italian UFO wave of 1978 was in fact mostly a media wave, overwhelming newspapers and other mass media all around the nation, in a very pervasive way, unprecedented in the past (and in the future as well), as it is also apparent from the annual totals of newsclipping in CISU Press Archive: never before that time (*) more than two thousand press cuttings had been collected in just one year, as in 1978, and never that happened again in the following years. The ufomania in Italian newspapers was already remarked at the time, sort of a “UFO psychosis”.

All collected newscuttings had long been ordered and set up on A4 paper sheets at CISU headquarters, where the 1978 section occupies seven archive boxes of (mostly original) clippings taken from dailies and local information newspapers, plus an eighth folder containing extracts from the illustrated magazines (which published extensive services on the UFO topic, in that year). In the last few weeks, some CISU volunteers have worked on the full scanning of this collection, which was completed in early May, 2018: 2,400 articles from newspapers, which will soon be joined by those from illustrated magazines. Upon this work, other volunteers are currently “renaming” the individual files so that they directly indicate the newspaper and the date of publication, to allow an automatic indexing and an easier recovery. 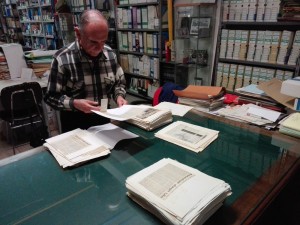 By the end of May a second part of the project will start, concerning UFO sighting case histories. The national catalog of Italian UFO sightings currently includes 1,800 reports for 1978, each one corresponding to an archive folder containing all sources relating to it. In recent years a meticulous work of cross-checking has been done between the already existing files and the sources subsequently collected or not recorded at that time, with the following reproduction and filing of several hundred “new” cases. At the end of this work we will now move to the indexing of these new cases, entgering coordinates (date, time, location, type) in the general database. This second phase of the project should be completed before the summer.

That’s a concrete way of commemorating the 40th anniversary of the greatest UFO wave of all time in our country.

(*) with the incredible exception of 1954: more than 4,000 articles, but only recovered in recent years through the systematic and targeted research of the “Operation Origins”.