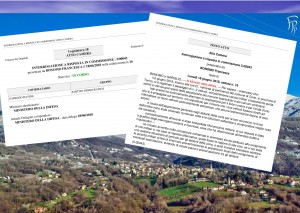 The parliamentary question announced last week by Hon. Francesca Bonomo [left picture] was presented to the Chamber of Deputies on Monday 18 June, about the aerial roar and the testimonies concerning two low-altitude military aircrafts in the Corio area (province of Turin) seemingly pursuing a light in the sky on June 6, as we already reported.

That is a question to answer, also signed by Hon. Davide Gariglio [right picture], and addressed to the Minister of Defense, as follows:

“Given that:
– on June 6, 2018, around 21 hours, in the area of ​​the municipality of Corio, in the province of Turin, the passage of n. 2 aircraft, most likely military fighters at very low altitude, was
heard and seen by most of the population of the aforementioned town and neighboring municipalities;
– this event has greatly alarmed the population due to the loud noise and the shock wave
which spread to the territory, but above all because of the fear that the two aircrafts were headed to intercept a third potentially dangerous aircraft, which some testimonies say they have seen;
– because of the fear generated in the area inhabitants for their safety, the police has been called by many and institutions urged to better understand what happened;
– after the event the Air Force was called, whose answer was evasive and incomplete in the opinion of the questioners, which has further fueled doubts and concerns;
to know
if the heard noise as above is to be attributed to the performance of military flights and, if so, what the reason was for this flight, if there was any danger to the area inhabitants, and what initiatives military authorities intend to adopt in order to inform the local population before carrying out any exercises, thus avoiding to create fear and worry among the inhabitants.”

The question gives a wrong time of the phenomenon (which actually took place shortly before 11 p.m., not 9 p.m.), from which we can assume the text was not based on the testimonies reported on social networks and local mass media, but on the press release itself (released by ANSA news agency on  June 10 evening) announcing the intention to present a parliamentary question by Hon. Bonomo and Senator Mauro Marino (both elected in Piedmont for the Democratic Party).