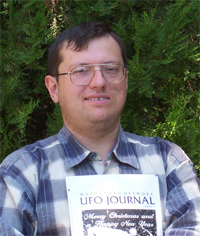 Mikhail Borisovich Gershtein was born in Leningrad (now St. Petersburg),  in 1972. He graduated at Russian State Pedagogical University in 1994.

Since 1988 his articles have often appeared in the local and national media. He has worked  for seven years (1993-2000) as a journalist and UFO expert for the St. Petersburg magazine Anomaliya, and since 2001 he has been editor-in-chief of the monthly e-zine UFO Navigator. Since 2004 he is also executive editor of  popular magazine Nexus (Russian edition).

In 2002 he was elected as a Chairman of Russian Geographical Society’s UFOlogical Commission.